We are hot in every sense of the word. I got my hair done so I feel like a million bucks. And Spirit is just always gorgeous. But seriously it felt like an oven this past weekend, so our jumping lesson was short and sweet.

My warm-up consisted of half-arena of trot and canter each direction, because who's-kidding-who? we were well past warm even just tacking up! We did a lovely gymnastics grid which forced Spirit to think about her body and the jumps, and was great practice for me regaining control after a series of jumps going downhill. I could feel Spirit looking at the jumps and thinking about her feet, and it was really awesome. She was waiting and quiet, but really got up and over those jumps.

We sent in our entries for the Meadows of Moorpark Horse Trials September 17-18. I'm pretty darn excited! Already sorting tack and cleaning my boots...
Posted by Sarah at 12:38 PM No comments:

Yesterday we ventured to the Meadows of Moorpark eventing facility for a schooling, and it was quite a wonderful afternoon adventure. Spirit started off a little full of herself - she did not want to stand quietly at the trailer and really felt that galloping was the appropriate warm-up gait. But after a stricter-than-normal warm-up followed by a few jumps, we settled into our groove and got down to business.

The Meadows had a nice selection of Beginner Novice and Novice fences for us to play over. We worked on successfully balancing while going downhill to a jump, spent quite a few minutes on mine and Spirit's bogey - down banks - and did quite well. We even threw in a nice sized ditch, some water, and a jump that is basically a huge box that you jump through with a Meadows sign at the top! We're so pro!

Spirit was fabulous (her new middle name) and seemed to not only enjoy herself immensely, but was very mature and had a down-to-business attitude. She stood quietly while we waiting for Storm and Jessica to take their turns, and she cracked her back over a few of the jumps. I had a few light bulb moments: slowing her feet down before the jump (we were getting a little scuttley), focusing on my positioning and letting her have her head for the down banks (talk about working on TRUST!), and really absorbing the feeling of having her up in front of me, but then still pushing her toward the jump.  All in all it was a fabulous schooling and I can't wait for the HT at the Meadows next month!
Posted by Sarah at 4:44 PM No comments: 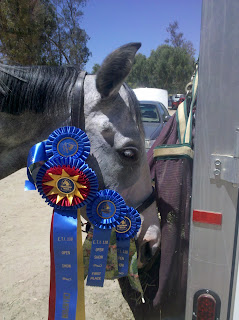 Yeah. So fancy. Spirit and I went to a fun, local ETI jumping show on Sunday, and we did pretty well. We were end-of-day champions in two divisions, and won lots of cool prizes including a saddle pad, Ariat backpak, and various grooming supplies and horse treats. Most importantly, we gained an unquantifiable amount of happiness, fun, and experience. :)  We had no refusals, no rails down, never went off course, and did really well in our first ever obedience classes. Plus, it was her first time going anywhere by herself - no trailer mates, and no buddies with her at the show. 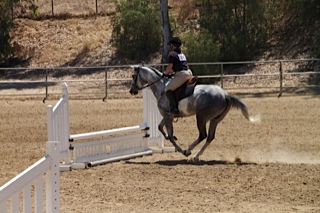 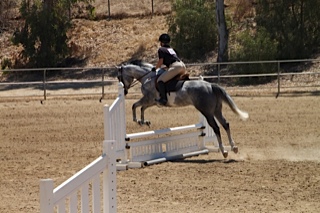 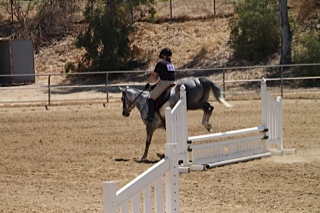 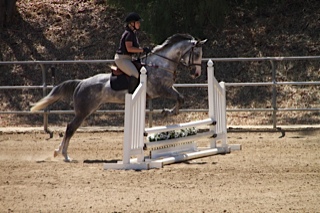 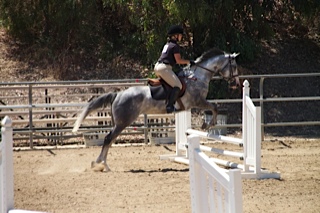 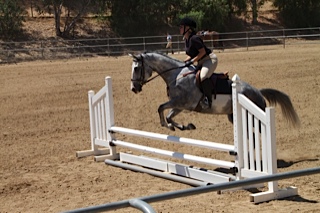 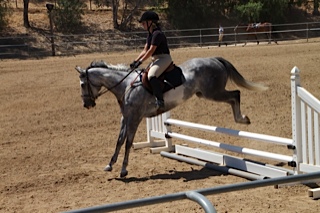 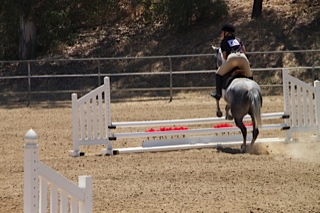 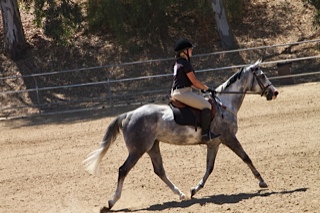 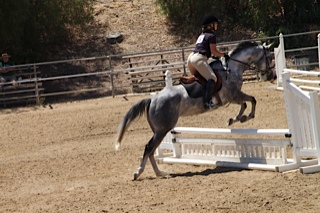 From Saddleseat to Eventing - Part 1

From day 1 in eventing, I have been very aware of my viewpoints, vernacular, and preferences and how they've been shaped by my upbringing in the discipline of saddleseat.

It's even been a point of humor between my friends and I:
"Won't chains on their front feet help them jump higher?"
"Eventing horses can jump over giant ducks but are afraid of a little firecracker?"
"Wow what a fantastic headset!"
I've learned enough by now to know how rediculous those sound to most eventing people.

For those who don't know that much about saddleseat, please allow me to give you a brief introduction. I'm not an expert by any means, but I can get you the overall picture.

The saddleseat riding style evolved alongside the breeding of the American Saddlebred in the America's old southern plantations in the early 1800s. Horses were expected to work all day in the fields, but also be nice enough to pull the family carriage to church on Sunday. The smooth slow gait and faster rack was developed at this time (man-made gaits, the difference between the two of these is just speed) to have a comfortable ride while still covering plenty of ground.

In terms of forms and functions of this style of riding, it truly is quite different from eventing. Here's some main differences:

Now, it has been many years since I've done any saddleseat equitation, but this photo of myself showing my friend's lovely mare in 2009 can give you the general idea: 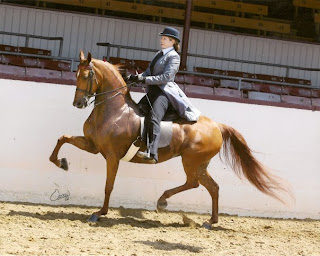 Now, no discussion of saddleseat would be complete without a touch on the controversial training methods. I'm only familiar with them in the Saddlebred show world, not in the other breeds' saddleseat worlds.
Firstly, there's the long hooves. If you look at the picture of Ladybug, you'll notice her feet are just a tad longer than was we see most of the time in eventing. However, hers were the shortest feet in the class by far. It has become standard practice to have hooves that are several inches (yes, inches) longer than what eventers would consider a proper length. Plates and pads are often added. This helps the horse achieve the higher knee action.
Secondly, there's their tails. Many saddlebreds and some other breeds or crosses have their tails docked for aesthetic purposes. The tendons are snipped, the tail is bent over, put in a tail set, and then they grow back holding the tail in the bent over position. Though now technically disallowed at ASB shows, some people still "ginger" the horse's tail as well. This is rubbing ginger paste under the horse's tail - it is irritating to the horse, so they hold their tails up higher due to the discomfort, and they also act more lively.
Thirdly, there's the use of firecrackers, fire extinguishers, plastic bags on the ends of longe whips, and other devices used to get the horse riled up. The desired result is better action and a more excited, hotter horse. This is not used at shows - only during training.
Fourthly, some put chains or rubber stretchies on the horse's feet, to help achieve higher action. This is only used in training - it is not allowed at shows.
Now, it should go without saying, but I feel the need to state that not all trainers employ these methods, and the trainers who do, use them to varying degrees and with different methods. Each person can decide for themselves the methods they feel are okay to use in the training of their horses.
Well, it's been a lengthy post. Next time I'll give you a little more insight as to my switch from saddleseat to eventing, and maybe some side-by-side discipline comparison commentary. Fun!
Posted by Sarah at 10:31 AM No comments:

I was out of town for a few days - I flew back east for a wedding (111 degrees + killer humidity = I LOVE California!). Spirit got turned out, put on the hot walker, and all sort of treats and loving from her adoring care team.

She hadn't been ridden in a week, but she was a perfect lady for me last night and we had a super fun jumping lesson.  We had good rhythm and balance, and managed to get over a one-stride double jump that I had measured completely wrong (making it 1.5 strides - sorry girl!). We did some jumps doing a fast canter/gallop, and that was a nice challenge. We've decided that Spirit's new middle name is "Fabulous". Spirit Fabulous. Has a nice ring to it.

After the lesson she got her shoes done, and we mapped out the rest of the competition season. Here it is, but I've also updated the Schedule and Goals page.

Sunday August 14th - ETI Show in Simi Valley (Laurie can't be there - she's gonna be at Woodside with some of her other clients). This is just a low-key exercise for Spirit and I to work on (A) jumping over new jumps, first time presented, (B) demonstrate good rhythm and balance even in a new setting [I'm pretty sure hunters classes values this], and (C) have fun. Well, having fun is really #1. You know what I mean.

Sunday August 28 - Camelot H/J Show in Newhall. Another fun little show to build confidence and demonstrate our ability to perform on demand. Laurie's other client(s) will also attend, so it will be a fun barn day.

Sat & Sun September 17 and 18 - Meadows of Moorpark Horse Trials. It's close, it's affordable, and it will be a good preparation show for my next HT.