Lovely ride in the mists

This evening I had a lovely ride on miss Spirit in the foggy mists after the sunset. It was cool and crisp, and both Spirit and I were calm and relaxed.

Prior to my ride, I did some pre-show chores; cleaning tack, clipping Spirit's whiskers, and sorting items into piles. The trailer has been washed, painted, even vacuumed! I'm so excited to use it.

We got our ride times - dressage is just about 11am Saturday with stadium in the afternoon and XC is at approximately 1pm Sunday.

Tomorrow I'll be packing my gear, grocery shopping and cooking, and reviewing my checklists. Then Thursday is our lesson and packing the trailer. Getting excited!
Posted by Sarah at 10:52 PM No comments:

The countdown begins. One week from today I will be loading up the trailer and driving on up to Fresno for the Ram Tap Horse Trials. I'm excited. I'm nervous. I'm resolved.

Time to revisit our goals. For this competition, I want to make it through each of the three phases without getting eliminated. I don't care if I come in last place - I just want to get a total score at the end. I know it doesn't sound like too lofty of a goal, but to be honest I am a bit nervous about achieving it! But I just gotta think positive and be a strong, supportive rider for Spirit.

Another goal is to have my "mental reset button" armed and ready and fully functional. "Manure" happens - its a fact of life - and it's pretty much guaranteed at shows. But the important thing is how you respond to it. I don't want to waste a single minute feeling negative, unproductive emotions or getting myself in a bad mental state. If things start to come apart on course, or if I'm stressed, or whatever may come up - I want to be able to not let it drag my attitude down and affect mine or Spirit's enjoyment. Gotta be able to press that mental reset button and move forward in a positive way.

I'm very happy that my best friend Jessica and her horse Storm (Spirit's best bud) will also be showing. We'll be competing against each other at the Beginner Novice division. I hope the schedule is such that we can watch each other, but ultimately we each have to do our own thing and manage our own schedules. Another gal from our barn, Wendy, will be competing also. She came to the last HT and she is a calm presence and a great rider.

At this show, I plan on being 100% self sufficient and independent. While I greatly appreciated the help that others offered me at the last show, I realized later that I was kindof dependent on it. On my third day, no one was there to help me tack up or get ready, and I was not only way more stressed out, but I was late to the warm up ring. This time, I'm going to plan my days as if I am doing everything 100% on my own, and therefore if people help me out - great - but if not, I'll be fine too.
Posted by Sarah at 12:56 PM No comments:

One of the human-horse teams that inspired me to start blogging and which has captured my brain and heart for many months now has suffered the horrible tragedy of losing their best friend. My heart goes out to you, Andrea - you took amazing care of Gogo and she is waiting for you across the rainbow bridge. <3
Eventing-A-Gogo 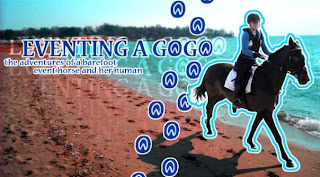 My last few dressage lessons have been absolutely dreamy. Constant contact has now finally been established, leading to overall on-the-bit-ness success and a new level of subtlety. This past Saturday in particular I ran through my dressage test for the first time (2010 Beg Nov Test A). I like the pattern, and we did pretty well.

Note to self, though: if you think your horse is going to be frisky because she wasn't able to get out as much as normal due to random rain, bring weapons! For whatever reason, I thought to myself "I don't need spurs or a whip today because she'll be so bright" - well, I needed those tools precisely because she was bright. Uh, hello, silly! Won't forget next time. We did have our first rear in a few weeks - I quickly kicked her forward and onward. But for sure I wish I could have done more ass kicking than I did. 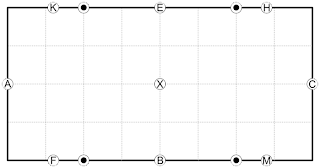 This is the short dressage court measuring 20'x40'.
Posted by Sarah at 2:50 PM No comments:

This past Wednesday I was planning on doing a dressage ride, in anticipation for my dressage lesson on Thursday. Alas, we got a freak 2 to 3" of rain. Arenas were closed. So I ended up cleaning tack, plumping up Spirit with extra pellets, then getting some cheap chicken wings with friends afterwards.

Thursday the arenas had dried up pretty nicely, but we still decided to call off the lesson - don't want to ask too much of them when it's sloshy footing. "We need to baby them a little bit before shows" my trainer said. Love it. But I still needed to get Spirit out so it was time to longe.

She was antsy at the tie-rail. Rain and lack of exercise does that. I could tell that she was ready to kick up her heels. I made sure she had her boots on.

On the longe we started off with a nice long walking warm up. She kept looking at me and tossing her head; I kept a steady flow of sing-songy voice commands to keep the pace and settle her nerves. Then we moved into a nice slow trot. It was pretty darn funny - I could tell that she just wanted to buck and rear and play and run, but she understood that we needed to be calm. She would trot lightly around, then leap into the air and kick out a nice buck, but then immediately resume the light airy trot. She didn't run or slide - she had nice collected gaits with the occasional "woo" fun kick/buck. At one point she got fussy and reared up the highest I'd ever seen her go, so I immediately barked at her and forced her FORWARD. I've decided she is not allowed to rear ever. I guess maybe the possible exception is if she is turned out on her own.

She then waited very nicely while I helped my friend long her horse. I gave some preventative anti-thrush stuff (they make it in dry powder, nowadays!) and plenty of pellets. Gotta take advantage of reduced exercise to plump her up!

We're 2 weeks away from our horse trials, so this Saturday will be dressage test practice.
Posted by Sarah at 2:37 PM No comments:

From the moment I showed up at the barn, I really focused on being calm, focused, and happy - and making sure that Spirit felt that way too. I gave her lots of treats and pats. When we got to Galway, again I made sure she was happy - treats, pats, not rushing around like a crazy person. We headed out to the warm up ring and from the first trot I demanded that Spirit be slow, calm, listening. She caught on real quick, and it felt more like dressage than a jumping warm up.

Then it came time for our first fence. It was a solid log out in the field. We left the starting box at a trot, and I had her up and forward, and then she stopped. We were like 10 feet from the jump. She danced to the right, so I pulled her left. Wrong move - my trainer wanted to know why I was pulling her off the line. I thought that it was a refusal - turns out, it wasn't. I needed to kick her on forward and make her jump it. Rest assured, I won't make that mistake twice. We reapproached and jumped fine. We did it the other way too, and did fine. Then we did the next fence, and the next one after. After screwing up on the first approach, I finally "got it" - the feel of how it needs to be. Balanced and not rushed, but still very forward - the feeling of her pulling on the reins, eager for the jump. I need to tap and kick well ahead of time, then keep her together and not let her squirt out. Straight and FORWARD.

Spirit and I both really enjoyed ourselves. It was challenging but rewarding. And most importantly, we both had fun. Time to send in entries for the October 22-23 Ram Tap show.

Meanwhile, I had two barn-mates with me. Jessica and her horse Storm did fantastic - they were bouncy and light and soared over jumps, and they were very straight (something they've been working on). Ashley and Brodie were out-of-this-world fantastic. They are gearing up for the half-star in November, so they did mostly prelim stuff. I looked at the jumps and thought "Surely you aren't jumping that one, right? Oh, you are?! OMG" They did some corners that made my eyes bug out, and they jumped over the duck in the water. Love it!

This past Thursday, I had a dressage lesson and sealed the deal with being on the bit the whole time. =) And let me tell you, it is paying off ten-fold - I can actually fix all my problems now by simply by adding leg and giving a small little squeeze of the rein.
Posted by Sarah at 9:55 AM No comments: