The Case of the Missing Carabiners

Once upon a time, several months ago, I arrived at the barn very early on a Saturday morning (say 6 AM or thereabouts) to prepare for going on some sort of trailer adventure with Spirit. I found her outside of her stall, meandering down the aisle-way of the pipe corrals. 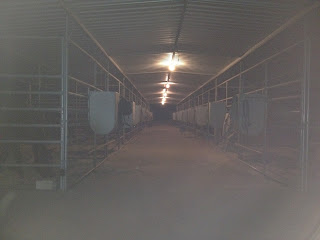 I didn't think much of it. Figured that the cleaning crew mistakenly forgot to latch her stall door. She was just helping to "clean up" the small bits of hay in the aisle. But just to be safe, I decided to purchase and use some carabiners to secure the stall door latch. And not just any carabiners - HOT PINK ones. 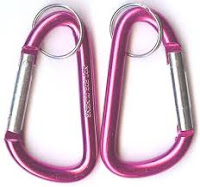 Several weeks later, I arrived at the barn to find that the carabiner on her stall door was missing. I figured it was removed by the cleaning crew, and accidentally pocketed instead of reattached to the door. No worries, I had bought a couple of them. I tied the second carabiner to the door using some twine, so that it couldn't accidentally got lost.  The next day, the twine had been eaten through. Oh well, it had been worth a shot, but I wasn't going to put up MORE twine for her to eat. The carabiner could just hang there on the latch.

A month later, the carabiner went missing again. Surely someone must have removed it to enter the stall to clean, and forgot to re-latch. Not a big deal, I put another one on there. But then it happened again. And again. Every few weeks the carabiner goes missing. At some point I run out of pink carabiners, and I start to wonder why the carabiners aren't showing up somewhere. I mean, who needs a half-dozen neon colored carabiners?

Last weekend, a fabulous barn mate tells me that she arrived early and found Spirit outside of her stall, wandering around the property. Spirit made a run for it and poor Cheri spent her precious horse-time chasing after my feisty mare. That did it. I decided to chain the carabiner to her stall door, and I talked to the barn owners that day.

"Would you mind talking to your cleaning crew to make sure her stall gets latched? I've gone through several carabiners, and at this point I think Spirit does know how to get out of her stall when it isn't latched."
"Sure, honey - will do." (They're fabulous barn owners).

A few days later, they show me this: 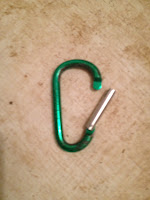 Broken. Carabiner.
And you-know-who was responsible. 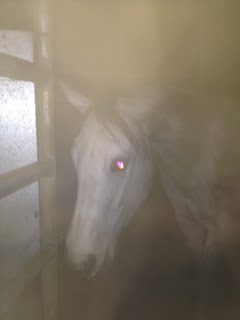 (Devilish eyes due to poor lighting conditions - but it is apropro for the topic, don't you think?)

Here is our new solution. Let's see how long this lasts. Our next strategy is to chain around the door post to the stall post. 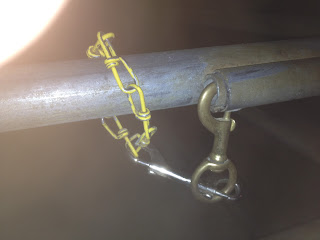 Note to self - approaching the owners was the best move I made. I should have done it sooner. The cleaning crew knew that Spirit was breaking the carabiners, but apparently didn't mention it to the barn owners - instead just leaving her stall unsecured. If I hadn't asked the owners to talk to their crew, who knows how long this cycle of missing carabiners would have gone on for?